The Mongoliad App: Is Neal Stephenson’s novel the future of fiction? 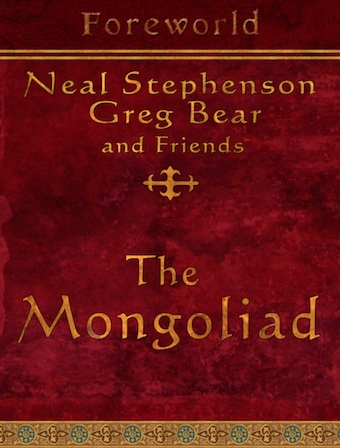 From Fast Company, an interesting piece by Kit Eaton:

This may, possibly, be one future of the novel: as an app. And who better to push the limits of writing than Neal Stephenson, an author whose novels have already explored weird and unusual corners of sci-fi, including intelligent books.

Late yesterday in San Francisco, at the SF App Showcase, a sneaky little startup company called Subutai demonstrated some of the tech that’ll be going into the Mongoliad app. This oddly-named creature is actually what we’re interested in–a reinvention of the novel as a serialized publication through a dedicated app. Stephenson isn’t the only one taking part, as both Greg Bear and Nicole Galland will be writing too, but Stephenson is really the core of the project.

This is exciting, as anyone who’s familiar with his Diamond Age novel will attest: This book imagines a future where a super-smart, partially artificial intelligent book is created, and acts as a young girl’s life guide. The hope is, obviously, that Stephenson uses his imagination to leverage novel and unexpected aspects of smartphone or tablet PC tech to transform the resulting publication into something surprisingly new … possibly even more of a transformation than paper-based magazine publishers are attempting as they rejig their content models towards the iPad. Words like “para-narrative,” “nontextual,” and “extra-narrative” certainly suggest this.

And before this makes you remember, with a shudder, the sort of extras-packed “publications” that burst upon the world when CD-ROMs became ubiquitous, it also seems that the readers will have an opportunity to interact with the storytelling process. This may be a notion from Stephenson, as part of the Diamond Age book’s programming involves its dynamically adapting to the situation around it. Speaking at the SF event yesterday Subutai’s CE Jeremy Bornstein revealed that there would be gaming and social media events wrapped around and inside the novel, and even demoed a user profile page that included a measure of a user’s “standing” in the Mongoliad community. There was also scope for users to “rate” portions of the story as it progresses. And while it seems that user interaction won’t play a role in the actual text of the publication, it’s going to be such a blended-media thing that this means user’s inputs still affect the overall performance.

Stephenson, Bear and new-media fans will be able to take part via apps on the iPhone, Android, iPad, and Kindle platforms when the event starts later this year. And everyone else should keep an eye on the project too, because while Net-published models like Stephen King’s The Plant and the original 253 didn’t revolutionize novel-writing overnight, they led, in some ways, to the Mongoliad. And this may be a peephole into the future of the novel.

I think this is extremely interesting. We do need to be pushed, I reckon, into a new way of imagining the book. I believe there is a whole range of creatives out there whose talents were not served best by traditional books nor by the existing digital media. I believe there is a whole new world of inspiration and practicality awaiting us, if we can just get away from being so fixated on the medium that we stop exploring how best the message is served.